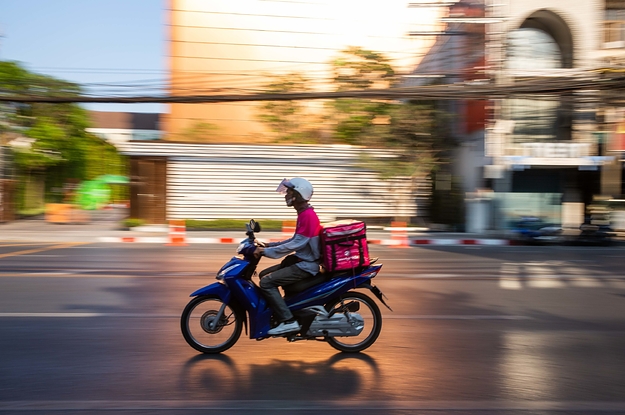 Food delivery apps will still process delivery orders placed after curfews begin in dozens of cities around the US, including cities where police have violently attacked people on the streets in recent days, BuzzFeed News has learned. Uber Eats, Postmates, Doordash, and Seamless (which is owned by GrubHub) all either reported deliveries would continue in some cities with curfews, or declined to comment on specifics.

People in about 140 US cities have been protesting against police brutality after George Floyd, a black man from Minneapolis, was killed in police custody on May 25. Dozens of cities have started nightly curfews this week. Around the country, police have reacted to protests with violence. Food delivery workers — who tend to be disproportionately people of color, especially in major cities like New York — could be at risk while completing orders.

An UberEats spokesperson told BuzzFeed News that it will not process orders after curfews begin in Minneapolis, San Francisco, and Oakland, at the request of city officials. But the service will continue to process orders in cities like New York, Philadelphia, and Washington, D.C., where police have used tear gas, rubber bullets, and force on protesters in the past few days.

New York City, for instance, enacted a 11pm curfew for June 1. This was changed to an 8pm curfew on June 2. According to an UberEats spokesperson, the UberEats and Uber rides were deemed essential services in New York City and New York state, which is why it will continue to process orders. The spokesperson said that delivery workers and drivers will receive information about the curfews in their app.

“Our teams on the ground are working closely with cities on how to best support them based on their needs and the local situation,” the spokesperson said. “Some cities have requested that we suspend operations during curfew hours while others want to ensure Uber is available for essential services.”

Spokespeople for DoorDash and Postmates declined to tell BuzzFeed News whether they would still process orders in all cities with curfews. Spokespeople for Seamless and Grubhub said they were communicating with government officials, but declined to name specific cities where they have suspended ordering after curfews.

A DoorDash spokesperson told BuzzFeed News that the company is “tailoring operations based on the guidance we have received from governments,” but did not respond to further questions.

A Postmates spokesperson said that the company is “adhering to curfew orders” and “working directly with Mayoral administrations to balance our essential services designations with the curfew orders as each municipality has a distinct approach.” They did not respond to further questions.

A spokesperson for Seamless and Grubhub said that the company is “evaluating the situation in each city individually and making decisions based on” input from “local officials, restaurants and drivers.” The company said that it is suspending operations when curfew begins in some cities, but declined to name specific locations, citing the “fluidity” of the situation.

While they could choose not to work, food delivery workers often don’t have an economic safety net, meaning they might have to work on multiple apps at one time, and work multiple jobs in order to make ends meet. In dense cities, such as New York City, they often travel by bike.

In some cities, protests continued long after curfew officially began. New York City, for instance, saw protests and demonstrations continue past midnight in places like Brooklyn. In Manhattan, 700 people were reportedly arrested for looting. The number of NYPD officers patrolling doubled from 4,000 to 8,000 when the curfew first went into effect on June 1.