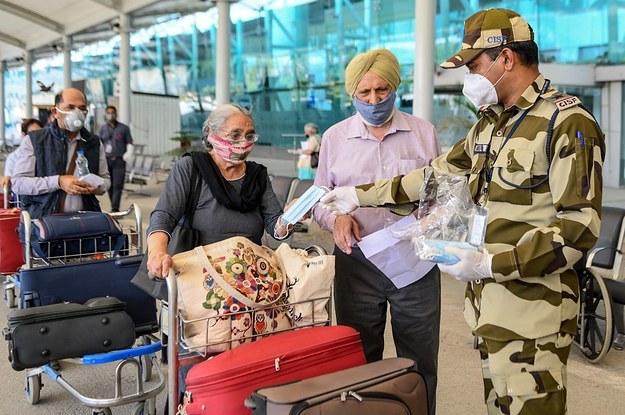 The journalists at BuzzFeed News are proud to bring you trustworthy and relevant reporting about the coronavirus. To help keep this news free, become a member and sign up for our newsletter, Outbreak Today.

Days before airports across the country reopen, the Indian government is pushing travelers to install its controversial contact tracing app, which requires constant access to a phone’s Bluetooth and location data, to board flights. It’s a move that could provide a glimpse of how air travel around the world may change following the first wave of the pandemic.

The guidelines for “Recommencement of Domestic Flights” issued this week by the Airports Authority of India, a federal government body that runs over a hundred airports in the country, require all passengers to “compulsorily be registered with ‘Aarogya Setu’ app on their mobiles,” referring to the app that translates to “a bridge to health” in Hindi. The guidelines said that airport staff would make sure people have the app installed while entering airports. Children under 14 will be exempt.

Another order issued by India’s federal aviation ministry a day later said that passengers must have a green badge within the Aarogya Setu app — indicating a low risk of COVID-19 infection — to enter a terminal. “In case of non-availability of Aarogya Setu, the passenger should be facilitated to go to a counter provided by the airport where Aarogya Setu can be downloaded.”

Exactly how those two orders would work in practice when airports reopen on Monday after a two-month lockdown remained unclear on Friday.

The federal aviation ministry asked travelers to submit a self-declaration stating they aren’t showing any COVID-19 symptoms and haven’t tested positive in the last two months if the Aarogya Setu app “is not available.” It was unclear if that only applies to travelers without smartphones, and what would happen to passengers with a smartphone who declined to install the app.

A spokesperson for India’s Civil Aviation ministry did not respond to multiple requests for comment from BuzzFeed News.

Experts said that the orders appeared to be crafted to make the app seem mandatory, even if its use is not required by Indian law.

“In these uncertain times, ambiguous regulations like these leave people with no choice but to download the app,” Tripti Jain, a lawyer and researcher at the Internet Democracy Project, a New Delhi-based nonprofit, told BuzzFeed News. “They may compromise their right to privacy in order to exercise their right to movement. It’s not a fair bargain.”

Unlike some countries like Qatar, which recently made its contact tracing app that requires access to location data, photos, and videos on a user’s phone mandatory, people in India, one of the world’s largest internet markets, aren’t legally required to install Aarogya Setu.

But increasingly, they have no choice. Last month, the country’s leading food delivery services made the app mandatory for delivery workers, and some pharmacies and grocery stores banned people from entering unless they had the app installed. Earlier this month, the city of Noida said people would face jail time if they didn’t have the app. So far, 65 places in India including universities and private residential societies, have made installing the app mandatory, according to a tracker run by the Internet Democracy Project.

To push back against the increasingly mandatory nature of the app, some Indians are trying to find workarounds. Earlier this month, a Bangalore engineer cut away the app’s Bluetooth and GPS permissions and had it always display a green badge indicating the user was safe.

But for the vast majority of Indians, Aarogya Setu may become as familiar as metal detectors and boarding passes.

Shrikant M., a banker who requested that his last name be kept private, is flying from Delhi to Mumbai, the busiest route in India, next week for a family emergency. “I don’t necessarily want to install the app, but I’m not going to spend time arguing with airport staff at the terminal through a mask if they stop me, so I’m just going to put it on my phone on the way to the airport,” he told BuzzFeed News.

Some critics questioned whether the use of the app at airports would be helpful in limiting the spread of the coronavirus pandemic or not — and if that was worth the infringement on Indians’ rights.

“[The app] may be helpful to an extent in combination with actual clinical data,” said Divij Joshi, a lawyer and tech policy fellow at the Mozilla Foundation who is tracking the Indian government’s surveillance measures in the wake of the coronavirus pandemic. “But ultimately, the app’s algorithms will use your self-declared symptoms along with your Bluetooth and location data to decide whether you’re at risk of COVID-19 or not, and consequently, whether you’re allowed to travel or enter a shop based on the green, orange or red badges it hands out.”

Joshi said that the use of the app as a kind of “immunity passport” in addition to contact tracing was concerning. “When this gets integrated into things like travel, it directly impacts your constitutional right to the freedom of movement.”