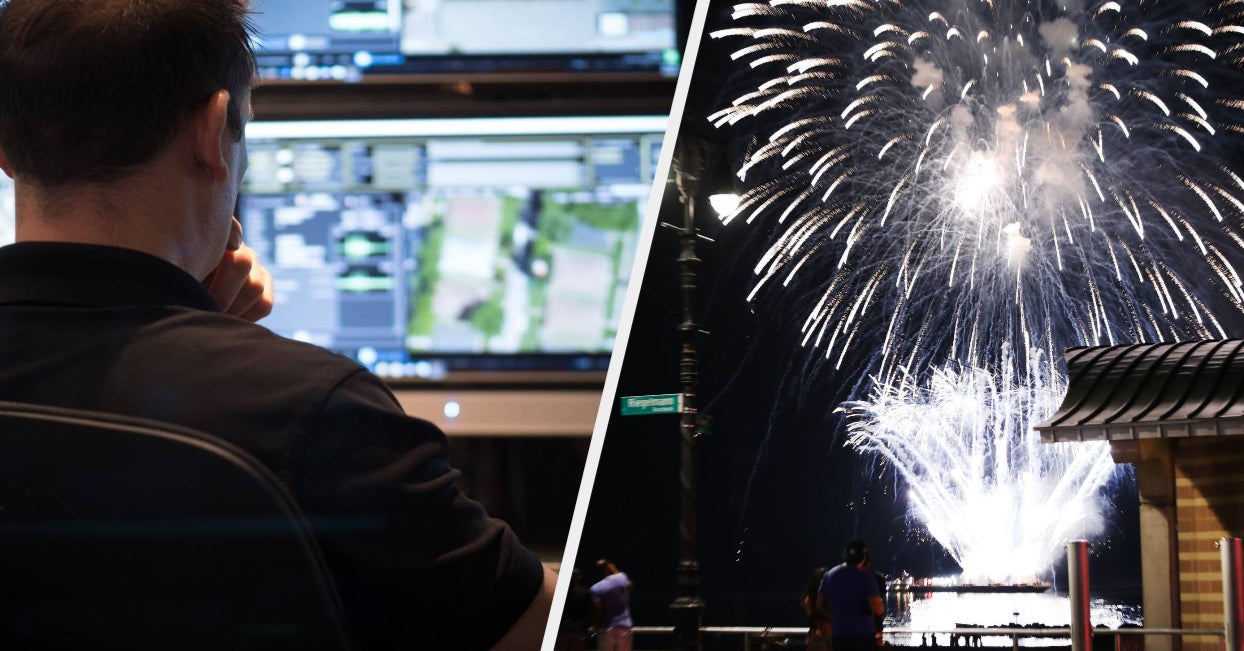 In more than 100 cities around the United States, audio detectors sitting on streetlamps and on the tops of buildings are listening for gunshots. The company selling these devices, ShotSpotter, claims it is the “first step to all of the subsequent gun crime reduction strategies,” according to its pitch documents.

But ShotSpotter audio detectors are also capturing and logging the sounds of fireworks. The data is kept as long as the city has a relationship with ShotSpotter. In cities like Richmond, California, the police are using ShotSpotter to go after people selling and setting off illegal fireworks.

The Richmond Police Department did not return requests for comment from BuzzFeed News.

Although we don’t know whether law enforcement beyond Richmond has used ShotSpotter data to police illegal fireworks displays, the company does provide data about fireworks use to every police department it works for — and that alone has critics worried.

“If you’re going to send police to respond to minor incidents like fireworks, I think that’s probably not good for community relationships.”

Dennis Mares, a professor of criminal justice at Southern Illinois University who has studied ShotSpotter, told BuzzFeed News it would be ill-conceived to use tools like ShotSpotter to target illegal fireworks.

“I think that’s a bad idea,” he said. “If you’re going to send police to respond to minor incidents like fireworks, I think that’s probably not good for community relationships.”

ShotSpotter pitches itself as an ethical way for police to conduct surveillance. The company argues that since its detectors are only triggered by very loud, abrupt noises, police can use it to respond to gun violence in communities that might not report shootings. Treating gun violence seriously, the company says, can help police departments build trust in those communities.

But by using ShotSpotter to go after illegal fireworks, critics fear that police departments are pushing that surveillance technology beyond the scope of its intended applications.

ShotSpotter representative Scott Beisner told BuzzFeed News that the company doesn’t endorse police using its product to investigate illegal fireworks, but said that the tool could be used in this way.

“[Police] need to be spending their time on the violent gunfire that’s happening,” Beisner said. “Fireworks are dangerous, but less dangerous than gunfire. So maybe sending community resources officers in the next day into these areas and educating the public might be a better approach than sending a police response into some of these neighborhoods.”

“Most of this technology ends up in minority communities.”

ShotSpotter is triggered by loud, “impulsive” noises that might be gunshots, which could include fireworks, helicopters, construction sounds, or thunder.

Once the system registers a sound, an algorithm classifies it as a potential gunshot or not. Once the software makes a guess, information about the incident is sent to ShotSpotter’s Incident Review Center at the company’s headquarters in Newark, California. There, one of the two dozen employees reviews a few bits of data — an audio clip, sound-wave formations, and a map — to make a human estimate of whether the noise was a gunshot, and whether multiple shooters or an automatic weapon might be involved.

But this time of year, the system takes a shortcut, assuming that many people will be setting off fireworks around the 4th of July. It bypasses human review for many of those sounds, instead sending those reports directly to the police.

“Usually a couple weeks before and about a week after 4th of July, we will go into what we call fireworks suppression mode,” Beisner said. “If the machine thinks it’s fireworks at a certain confidence level, then it will just automatically dismiss that and it never gets presented to our review center.”

But all incidents, even the ones that bypass human review, end up in ShotSpotter’s Investigator Portal, an interactive map showing every incident of possible gunfire, fireworks, and other noises.

If police want to visualize and target places where there may have been illegal fireworks, the Investigator Portal allows them to do so with relative ease.

Mares said that he’s concerned about how ShotSpotter could be used to surveil and over-police nonviolent crimes in communities of color.

“Most of this technology ends up in minority communities,” he said. “ We already have a long history of issues in those communities with police relationships… Where’s it going to end?”

ShotSpotter isn’t usually on every block in a city. Usually, it targets areas where there has been gun violence in the past. The result is often that ShotSpotter can often be used in what critics call over-policed areas — meaning that ShotSpotter will only report illegal fireworks in those places, leading to a disparate impact of the technology.

New York City paid $1.5 million for ShotSpotter in 2015, and it’s since expanded the service. It’s a major client for the company: According to a ShotSpotter SEC filing in 2020, the company’s contracts with Chicago and New York made up 19% and 13% of the company’s revenue for the first three months of 2020.

New York City has also seen a dramatic increase in people setting off fireworks. For instance, the city received 1,680 complaints for illegal fireworks in one week in June, up from just 12 complaints in the equivalent week last year.

“Technically, there’s no limit to what you can do with audio detection.”

Although New Yorkers have been at the forefront of the Black Lives Matter movement and demonstrations calling to defund the police, the NYPD has continued to respond violently to protests in recent weeks — shoving, pepper-spraying, and arresting protesters.

Illegal fireworks are just the latest nonviolent activity that police have decided to pursue. In Flatbush, police arrived in riot gear, closed off a block, raided an apartment, and arrested at least one person following reports of fireworks. Days later, Mayor Bill de Blasio announced that 40 law enforcement officials would be on a fireworks task force to arrest the “big fish.”

ShotSpotter makes hefty promises. According to documents the company gave to Baltimore in 2018, which BuzzFeed News obtained via a public records request, ShotSpotter told police that it could allow “faster evidence collection and witness identification,” “improved community relations and collaboration,” and “increased suspect leads [and] suspect arrests.” Baltimore paid $850,000 for one year of ShotSpotter, financed by Bloomberg Philanthropies.

But a study of the St. Louis Police Department found that while ShotSpotter increased the number of calls for service for gunfire, it did not actually reduce crime or result in many arrests.

Over 19,000 calls for service were activated by ShotSpotter over a decade. Out of these 19,000, only 13 arrests were “uniquely tied” to ShotSpotter — arrests that couldn’t have happened without the technology.

“So in most cases, is there an added value [to having ShotSpotter]? I’m not sure of that,” Mares, who worked on the study, told BuzzFeed News.

Some cities, like Fall River, Massachusetts, canceled their ShotSpotter subscription.

That may be leading the company — which had a net income of $13,000 in the first three months of 2020 — to look for new applications of its technology. “If we are unable to maintain and expand coverage of our existing public safety customer accounts and further penetrate the public safety market, our revenues may not grow,” a recent ShotSpotter SEC filing read.

The company is already trying to prove its usefulness to police. It acquired a predictive policing company, HunchLab, in 2018. ShotSpotter also offers surveillance camera integration — meaning if ShotSpotter detects a loud noise, it will trigger a camera in the area to start recording. Minneapolis police use this feature, and Baltimore police paid $19,000 for it in 2018. Boston police even use ShotSpotter data to monitor people on parole, and “maintain 24x7x365 awareness of any parolee who may be violating the terms of parole by committing crimes or consorting with those doing likewise,” according to company documents.

But critics fear that if ShotSpotter happens to be a useful way to go after fireworks, the company is not in a position to discourage the practice. The company’s financial future depends on proving its usefulness and expanding coverage areas.

“I think it’s a slippery slope, to be honest,” Mares said. “So now we got fireworks. What’s going to be the next step? When somebody slams the door loudly? Technically, there’s no limit to what you can do with audio detection.”

The final quotation in this article was said by Dennis Mares. A previous version of this article incorrectly attributed the quote to Scott Beisner. 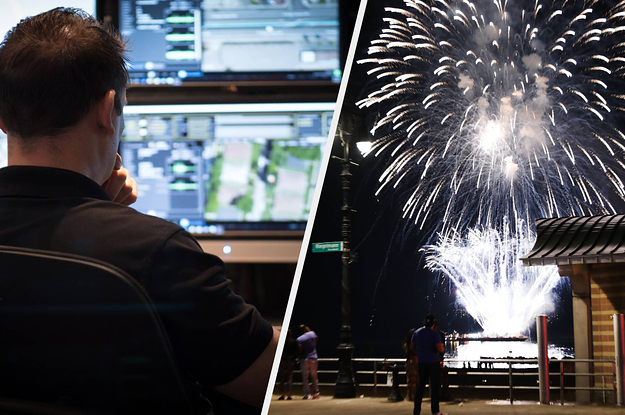