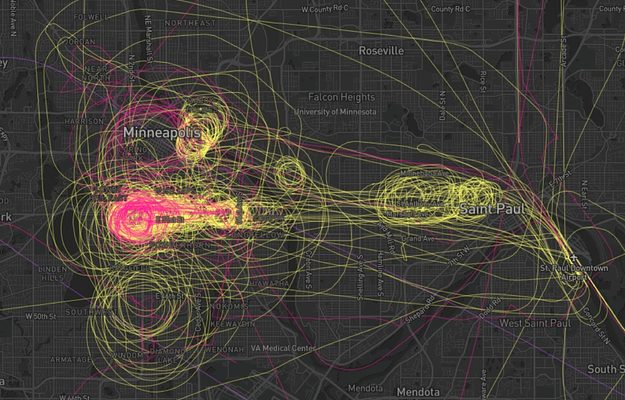 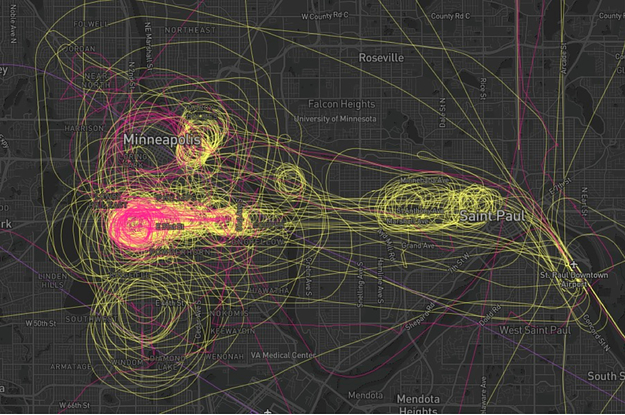 As crowds protesting police brutality swelled in cities across the United States this weekend, law enforcement agencies and the National Guard took to the skies — watching from hundreds of helicopters and planes circling overhead.

Surveillance planes are always in action over the nation. To give an overview of the airborne response to the current civil unrest, we mapped flights by local police, state and federal law enforcement, and military planes from 7 p.m. Central Time on Friday, May 29, to 7 p.m. Central Time on Sunday, May 31. The locations of large demonstrations coincided with the most intense aircraft activity.

We identified law enforcement aircraft from information on their operators in the Federal Aviation Administration’s registration database and tracked them using signals from the planes’ transponders compiled at the crowdsourced flight-tracking website ADS-B Exchange. (We assumed planes registered to cities or counties were used for law enforcement unless the registration information identified them as dedicated to another purpose, such as a city fire department.)

Unlike commercial sites, ADS-B Exchange doesn’t follow requests to block aircraft from being tracked, so it can give a more complete picture of surveillance activity. It also flags aircraft operated by the US military, including National Guard units, so we recorded all military flights over the nation. Most were not over major cities, but some military helicopters did fly over the protests.

In the maps below, click or tap on any flight path for more information on the aircraft involved.

The protests started in Minneapolis, where George Floyd was killed while in police custody on May 25. In addition to helicopters operated by the Minnesota State Patrol, we detected two military Black Hawk helicopters over Minneapolis that the state’s National Guard confirmed were its aircraft. These circled above the most intense clashes between protesters and police.

Huesdens denied that the helicopters were collecting intelligence on protesters, which he said was a prohibited activity for the National Guard. He stressed the Black Hawks’ role in monitoring the safety of National Guard personnel and the public. “As long as Minnesota Guardsmen are performing important, and potentially dangerous missions we will use any asset available to keep them safe,” Heusdens said.

Like most law enforcement aircraft, the Minnesota State Patrol helicopters that circled the protests are equipped for surveillance. They have high-resolution optical and infrared cameras that can monitor activity at night and transmit video to observers on the ground via a microwave downlink system. The state patrol’s pilots are trained to fly wearing night vision goggles.

The FBI, the Department of Homeland Security, and the Drug Enforcement Administration each have substantial fleets of surveillance aircraft. Federal planes can be called in to assist local law enforcement; FBI planes flew over the protests in Ferguson, Missouri, in August 2014 after police shot Michael Brown, and in Baltimore in April 2015 after Freddie Gray died in police custody.

ADS-B Exchange captured only 26 FBI, DHS, and DEA aircraft from Friday to Sunday. BuzzFeed News previously found that the FBI and DHS surveillance planes are typically much less active over the weekend.

But a Predator drone operated by Customs and Border Protection, part of DHS, was spotted by investigative reporter Jason Paladino of the Project on Government Oversight flying around Minneapolis in a hexagonal pattern earlier on Friday. The drone was “preparing to provide live video to aid in situational awareness at the request of our federal law enforcement partners in Minneapolis,” the agency told congressional staffers.

During the protests, a Bell 412 helicopter operated by the US Park Police, part of the Interior Department, circled the White House. The park police also had officers on the ground around the White House, together with Secret Service agents and DC metro police, where they clashed with protesters.

The maps here show a snapshot of activity in what is a rapidly escalating situation — especially after President Donald Trump threatened on Monday to unleash the military on protesters if the unrest was not quickly brought under control.

On Monday night, two military Lakota helicopters were seen over Washington, DC, hovering at very low altitude directly over crowds in what appeared to be a hazardous show of force. Lakotas are generally used for disaster response, medical evacuation, and homeland security missions. They are used by the US Army and the National Guard.

It is unclear which unit those planes belonged to. The DC National Guard did not immediately respond to a request for comment.

A helicopter operated by the Oakland Police Department was joined by light aircraft from the California Highway Patrol to monitor clashes between protesters and police in Oakland. The highway patrol also flew over protests in San Francisco’s downtown financial district.

Search for your city

Use the search box at top left to look at flights from last weekend in any city across the nation.