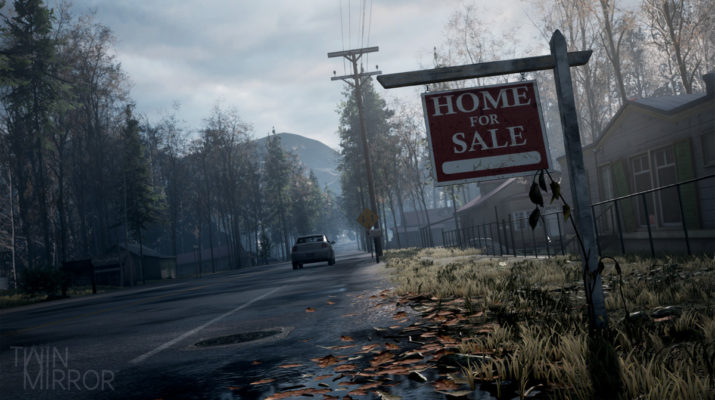 French game studio Dontnod loves the supernatural. The team’s breakout hit was the original Life is Strange, which starred a teenage girl who had the ability to rewind time. The sequel featured a young boy with telekinetic powers, and in 2018, the studio dabbled in roleplaying games with Vampyr, which put players in the role of a bloodthirsty denizen of the night. But around 2016, the team decided they wanted to create something a little more grounded.

They eventually landed on the idea for Twin Mirror, an adventure game about a former investigative journalist named Sam who ventures back to his hometown following the death of his best friend. Naturally, he gets wrapped up in a much bigger mystery involving the entire town. Sam does have some video game-esque abilities — including a “mind palace” for piecing together clues and solving mysteries — but there are no superpowers or mythological creatures.

“You want people to be able to understand the mystery,” game director Florian Desforges says of the decision to eschew the supernatural. “Yes, there are some supernatural elements in how we display Sam’s unique mind, but the story itself, the logic of what’s happening, the motivation of the characters, all of this is rooted in reality.”

While the team knew from the beginning that they wanted a grounded story, it took time to figure out what that story would be. The issue, according to Desforges, was that just because a story is interesting, that doesn’t mean it offers interesting ways to interact with it. What made Sam and his quest to uncover the secrets of his hometown compelling, says Desforges, is that it struck a balance between those two factors. The team loved the character and mystery, but they were also excited about creating ways for players to inhabit Sam’s investigative mind. “We were quite convinced we found the right mix between these two aspects,” Desforges says.

“We were quite convinced we found the right mix.”

However, around 2018, the team did some major reworking of the game based on playtesting, which included restructuring it into a single, non-episodic experience and pushing back the release date. They had all of the right elements, but things just weren’t gelling. “Trying to split it into pieces, sometimes it was breaking down the rhythm,” says Dontnod’s head of publishing Xavier Spinat. The process involved some extensive rewrites of the story to make it flow as a seamless whole, as well as restructuring the logic of some of the choices.

Twin Mirror takes place in a small town in West Virginia, which is becoming something of a theme for Dontnod. The French developers seem particularly enamored with Americana; the first Life is Strange took place in the picturesque Arcadia Bay, a fictional town in Oregon, while its sequel was a desperate road trip that spanned from Washington to Mexico. The upcoming Tell Me Why, meanwhile, is set in Alaska. “As a thriller, we were looking for something with some character,” Spinat says of the West Virginia setting. “We also wanted a place that wasn’t a big city.”

The new game is slated to launch later this year, and it’s coming to PS4, Xbox One, and PC (it’ll be an Epic Game Store exclusive for one year). Twin Mirror has been in development for several years, and, as is the case with most games at the moment, that process has slowed recently due to the ongoing pandemic. Dontnod’s production is a particularly international one; it’s a French studio working with a Japanese publisher that has testers in Romania, motion capture work done in Germany, actors in Poland, and voice recordings done in the US. Managing all of that has been tricky, but the team says production is still going strong.

“We have still managed to move forward,” says Spinat, “but much more slowly than we would like.”